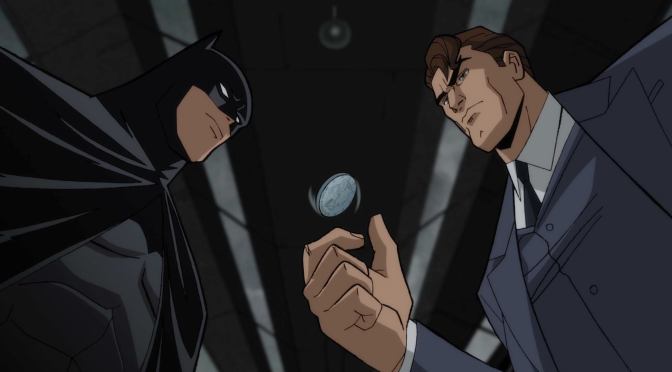 Investing not just time, but money, into a long-standing series of animated features that has shed much of its staple cast members is a bold gamble. Not just because Batman: The Long Halloween, Part 1 is an adaptation of a dearly beloved comic book classic, but also because it makes changes to the style and soundscape synonymous with the Caped Crusader and his company. Cutting out the context that makes this case so compelling, an adaptation of an exceptionally infamous comic book series is no small feat for the animated landscape. After the sour taste of Batman: The Killing Joke, the last thing fans of Batman want is another dud note on an exceptionally acclaimed comic.

Its dialogue, at least initially, is snappy and considerate of those famous tropes of the Batman branch of writing. Alfred (Alastair Duncan) and Bruce Wayne (Jensen Ackles) have some exceedingly nice moments together. Rightly so, but copy and pasting these gags and amicable affairs to other parts of the film, with different characters, is noticeable and cheap. Scenes with Joker (Troy Baker) come late into the running time but are worth it to hear Baker work his magic, however brief it may be. He flourishes in the moments of isolation, where he finds himself surrounded by characters that do not really matter. He is one of the few characters not to be saddled with dialogue of nonsensical proportions. Written moments that are devoted solely to foreshadowing dumb lines or ineffective emotional melodrama.

But when it manages to focus on the characters it wishes to build up, much of the heavy lifting is already done. Audiences are expected to be at least somewhat familiar with the characters and their tropes. Harvey Dent (Josh Duhamel) isn’t without his coin-flipping conundrum and lust for money. In fact, it is rather immediate and, like many of the moments director Chris Palmer brings to this, they are mired by a tongue-in-cheek styling. Batman: The Long Halloween, Part 1 is never fully prepared to take itself all that seriously. Its humorous dialogue often takes a turn, especially when concerned with the world of James Gordon (Billy Burke). In the same scene where he professes his love for turkey trimmings, Batman tortures a man by flipping the chair he is bound to.

We are all bound to this tale, and until its second half releases, we are glued to the notion that the quality could take a further dive or trundle on with relative calmness. While its animation is sluggish at times and not all that defined, the strengths of the writing aid Chris Palmer’s direction tremendously. Slow zooms in on slower moving characters do not make for an exceptionally striking portrayal of James Gordon’s personal problems. It is textbook cliché, and for that we, perhaps, should be rather glad.  Janky animation is the least of our worries at times, especially when our attention is diverted to moments of strong character development. Its work as an adaptation is unknowable for me, but as a standalone bit of Bat-oriented entertainment, Batman: The Long Halloween, Part 1 is fine enough. It will excite comic fans and provide a brief respite for those in need of a forgetful animated piece that is made, primarily, to build up a follow-up feature.