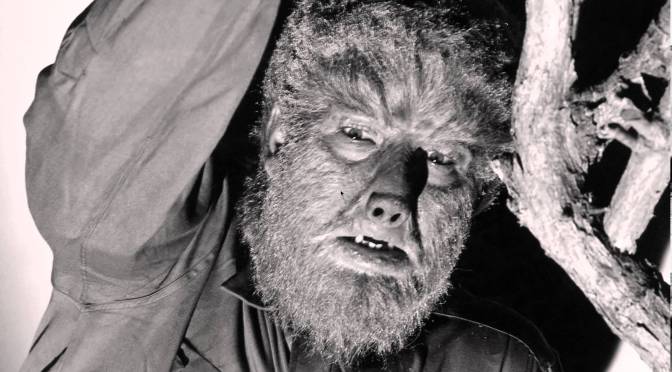 Tragedy strikes the conflicted man seeking his inherited fortune. It is not the death of his brother that pushes Larry Talbot (Lon Chaney Jr.) into a fit of despair, but his transformation into The Wolf Man. He couldn’t care less for the conflict now thrust into his family life and those that survive his brother, his father (Claude Rains) included. He cares not for his family, but for his own, vested interests and ideals. It is this that soon falls to the wayside, his ego captures the better of him and his infatuation with the dames strolling around town are stripped from him. The Wolf Man is a classic of the Universal Monsters series, and, in a similar vein to The Invisible Man, shows a man without morals, punished for the greed and gluttony he shows to his family, and the creepy overtones he has for his pursual of Gwen Conliffe (Evelyn Ankers).

Punishment must be served to a man such as this, and it turns him into a beastly werewolf. Director George Waggner’s most recognised work, The Wolf Man pumps fog and smoke into the forests Talbot lurks in. Chaney Jr.’s performance is a solid one but never titillates the mind as Boris Karloff of Bela Lugosi did. He is not one of the memorable villains of the period, but at the same time, it is still a rewarding experience to watch. An easy film to engage with, not just due to its brief running time, but through the pacing of the story. Waggner respects the time of the audience, understanding that, by this point in time, the audience is there to be horrified, rather than dragged through spiel and jargon.

That is where The Wolf Mani falters also, though. While the make-up and design Russell A. Gausman and Jack Pierce provide are stunning, it is Waggner who has no real command of the slower moments. Relying on the fine elements conjured up by Ankers, Rains and Chaney Jr., there are clear issues with how this story progresses and why. No major allegory is to be made. While the best of these monster mashes provides compelling, interesting themes and theories, The Wolf Man does not get beyond the sins of greed. It is no Frankenstein and the terrors of man playing God, nor does it accelerate the tones of The Invisible Man, of the individual isolated and abandoned by society. The Wolf Man grapples with little, and, in turn, has less to show for itself.

Do not think this is a bad piece of film, for it is a good addition to the series of Universal Pictures from this era. It is arguably one of the final, notable products to come from the era, and it is far superior to that of The Mummy. Acceptable qualities are found, with noteworthy technical elements and some lacklustre performances. The fog that finds itself flowing through the fields is not thick enough to mask the repugnant performances, but it does well to hide the rough edges that surround these uncut, unclean characters.