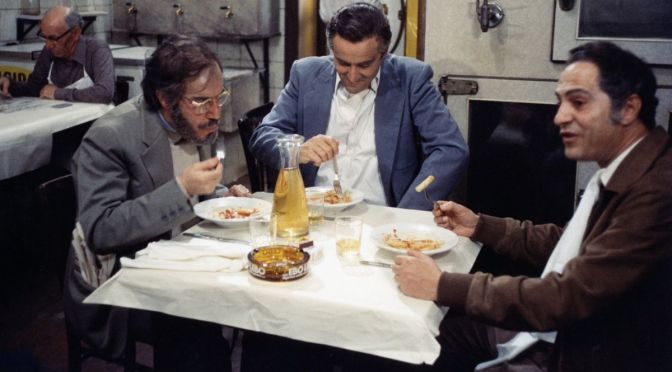 Love, as director Ettore Scola suggests, is a fickle and confusing emotion. His 70s feature film, We All Loved Each Other So Much implies, from its title alone, the pain has yet to pass. The loss of fondness still a mark of horror for these three, war-bonded friends. Their illusions and friendship are tested consistently and, crucial for the narrative, it is on the rocks as often as can be expected for friends who have fought through thick and thin. Illusions of grandeur sweep through these leading characters, all of whom deal with their predilections and hopes with varying levels of competency. However they deal with them, it all comes through well under the watchful eye of Scola, and his commanding camerawork.

Presenting these friends and their similar interests is no small feat, with Scola finely tuning his characters. They play into one another well, and much of it feels like a nod to the Italian realism that inspired it. Flickers of real joy and heart are found throughout, weaved into the narrative with such careful hands. That care relays a strong and potent message, one of friendship during times of crisis, and how important a closely-knit group can be when rushing headfirst through the horrors of reality. Offering up musings on the real world is all well and good, but the light-hearted, pained smile across the face of Scola’s craft makes for a film that has poignant and engaging points to make, but nothing a bit of hardcore misery wouldn’t achieve better.

Still, to protest against Scola’s ability to craft engaging blends of comedy and drama would be foolish and futile. What he presents here is solid craftsmanship, and alongside Nino Manfredi, Vittorio Gassman and Stefano Satta Flores, he procures a leading cast worthy of his many sentiments and suggestions. Dialogue between the three is thick and fast, often a tad loose and freewheeling, but the ingenuity and pacing for these moments is exceptional. Truly the strength of the film, the dialogue, and as it clambers up to the pique of its problems, it is startling to behold a rather underwhelming end to this troubled group of companions. Key to the workings of this film, though, is chemistry. It is found in abundance throughout, and as these three characters travel through their many years together and apart, one constant in their lives is their chemistry.

Scola suggests that life is cyclical, and no matter the choices we make or the challenges we face, we soon revolve back toward where we first were. We All Loved Each Other So Much is heavy at times, and sloppy in other moments, rambling and raving about oddities of culture or philosophy. A real mixed bag for topics, some shine through far better while others fall to the wayside with no notion of any hard-hitting commentary, which Scola appears to desire from every effort he throws at the film. He does a superb job, though, he and his cast put together a film that will leave a sombre, if unrewarding note on the heart, with plenty of strong performances to carry it towards its saddened finale.